In November 2017, Jason Gress approached me and asked me to tackle the website for his company, Oregon Floor Safety. He had some vague concerns about it, but primarily knew it had been done as a favor and probably contained some easy wins that could help it be more effective for his business.

He trusted Sterner Stuff to do it, and I appreciate the opportunity. At a glance, there were definitely some improvements to be made.

Keep in mind that a lot of changes are going to seem inconsequential. They’re a bit under the hood, and don’t look like a whole lot, but they should put more eyes on his website, which means more folks reaching out, which means more business closed.

When Jason and I got together, the first thing I did was review the services advertised on the homepage and for each one, ask “Is this a primary focus for your business?” For several of them, the answer was a definite no.

To make matter worse, the industry that Jason had seen the most success with – the automotive – had no attention at all.

Some of these are vague, some we decided were less lucrative, some have high barriers to entry and some, Jason ultimately had never applied his services at. So we trimmed things up. Jason and I identified a blend of the most lucrative industries for his business as well as those he already had a reputation for. We also updated each tile to make sure they had driving copy and a link that begged to be clicked rather than “Read More”.

Finally, we split these services into two different groups–commercial and residential. This helps visitors quickly identify the services that are more relevant to them. We kept commercial over residential, as that’s the crux of Jason’s business and represents his most lucrative clients. 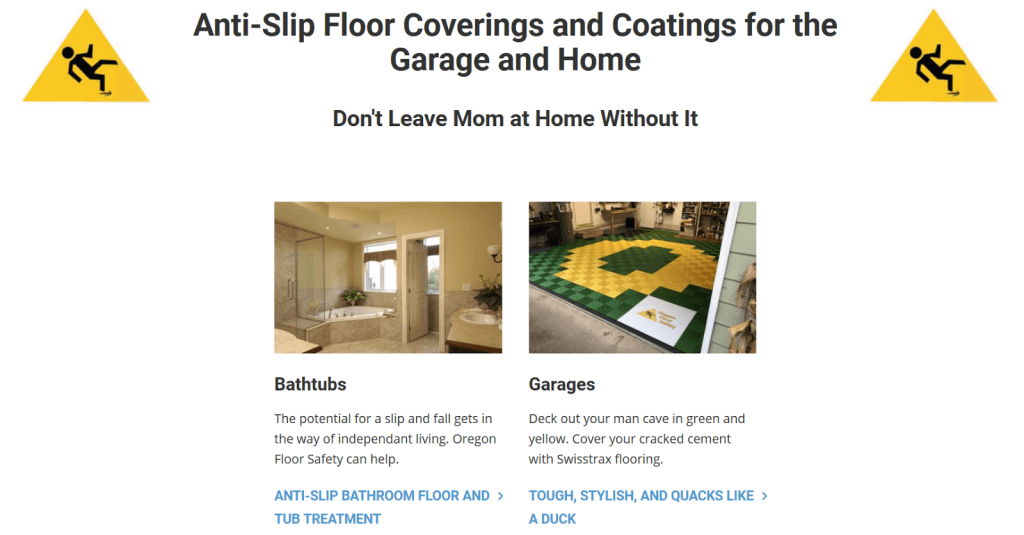 The buying incentives for residential customers are different, too. They probably won’t have a lawsuit on their hands, but they do want to find a way to keep from moving their parents into assisted living facilities. In a garage, SwissTrax offers an opportunity for folks to personalize their space, whether or not they care that it’s safe, so we pushed the U of O angle.

As a fairly fresh business, Jason needs to maximize on the experience he has. Folks trust someone who’s done the job before. This meant putting Jason’s completed work front and center, rather than relegating it to a nav menu.

Where there had previously been a slider with statistics and text that was accidentally rendered unreadable, we’ve now put Jason’s work front and center. We’re really doubling down on the automotive angle, and also incorporating local brands that potential buyers will recognize.

So we’ve done some good work with the homepage, but how does someone go about updating it? Good question.

A lot of DIY WordPress-ers are flexing the power of page builders these days. There are some great advantages to page builders:

But they also come with some disadvantages:

The same things that allow you to create a unique and magical site allow you to screw it up and create a scary, non-uniform experience. Because the actual data driving the website isn’t separated from the layout, it becomes really easy for folks to make avoidable errors.

Page builders are a skill just like programming is a skill, and not necessarily easier or harder. It just appeals to a different learning style. You have to be able to recognize when it’s okay for things to be different and when things need to be the same, understand how to use the page builder to accomplish that, and have the awareness to notice when you accidentally mess something up.

I wanted to avoid this burden on the Oregon Floor Safety website, to at least some extent.

My solution was to introduce a custom data type on Jason’s website. Out of the box, WordPress manages content like posts, pages, and media. That’s it. But it’s super easy to extend WordPress with your own data types, so I created “Installs”—a job, case study, whatever you want to call it.

Jason can now hop in and add any number of completed jobs. The interface uses the familiar posts and pages interface, but gives us some extra power in the template. More on that later.

The theme has been coded to specifically grab child applications of commercial and lay them out with images and links, and then do the same for residential. It reuses the same code every time to ensure they look uniform.

If Jason adds a new application, even without any installs, it’ll show up on the homepage. Super easy.

By clicking through to any one of these applications, site visitors get that extended description and a strong call to action for that particular industry or application. Additionally, if there are any installs associated with that application, they’re automatically populated at the bottom of that page. You can look at the automotive page for a great example.

So that’s the most obvious, visible stuff changed on Jason’s site. No big redesign, because the thing looked okay. Instead, we focused on creating a better piece of advertising. Let’s move to some under-the-hood stuff.

Because of a combination of corners cut when Jason’s site was first made, plus simple and understandable lack of knowledge, there are some really easy things that should have been done to help Jason’s site rank higher in search engines that wasn’t. Let’s start with what are called “meta titles”.

Just so we’re clear, the titles I’m talking about right now appear in the tab you have open for a website. They get reported to search engines. They aren’t necessarily displayed on the page.

The auto repair page didn’t actually exist before, but we loaded it in a way that’s both readable to humans and also covers a variety of search terms that Jason might want to rank for—”Auto Repair and Dealership Slip Prevention and OSHA Compliance”. With a more concerted effort, you might start creating dedicated blog posts about OSHA compliance in auto repair garages. You’d start trying to establish backlinks, which are links on external sites that link back to you, specifically to your content about OSHA compliance in auto repair garages. So on and so forth. For now, we’ll just focus on page titles.

As a last example, we took “Restaurant Kitchen and Dining”—a really vague and broad title that has no hope of ranking well for floor treatments (and, specifically, anti-slip treatments)—and replaced it with something more specific: “Anti-Slip Restaurant and Kitchen Floor Treatments – Oregon Floor Safety”.

I did the same thing with meta descriptions on several pages of the site. Much like the titles, these don’t usually get displayed to users. Instead, search engines read them and get a quick synopsis of what your web page is talking about.

The next thing I noticed was URLs on a lot of pages that didn’t make sense. When Jason’s theme was installed, it had the option to preload a bunch of filler content. This content was for a company that did something other than floor safety. A lot of this content, these pages, were repurposed, but no one updated the auto-generated URLs, and so we ended up with some really misleading URLs out there. This is bad for search engine ranking, it’s bad for screen readers, it’s bad for user experience—it’s just plain bad.

Here are some examples of URLs I had to update:

But you can’t just update these willy-nilly! Yes, they’re bad URLs, but Google has indexed them, and it’s possible people have linked to them from elsewhere on the internet.

So for each URL you change, you have to set up a redirect. If someone somewhere is linked to an old page on your website, the redirect ensures that the user is sent to the new page.

I use a great WordPress plugin called Redirection to accomplish this. It even tells us how many times that URL has been hit since we set up the redirect. Within the first couple days, we saw 6, 10, 5, 11 hits on some pages—all of those would have been lost to the 404 page if redirects hadn’t been set up.

Specifically, this also tells Google to update its index with the new URL. A 301 redirect says “I’m permanent, so update me!” Sometimes you might use a 302, which says “I’m temporary, so don’t update the index, but redirect users for now.” This would be used to send folks to an under construction page or something like that.

Finally, I configured Google Analytics and Search Console so we can do something with all that data. Let’s take a look at some terms that Jason’s site started ranking well for, how many impressions those terms are getting, how often people are clicking through, etc. 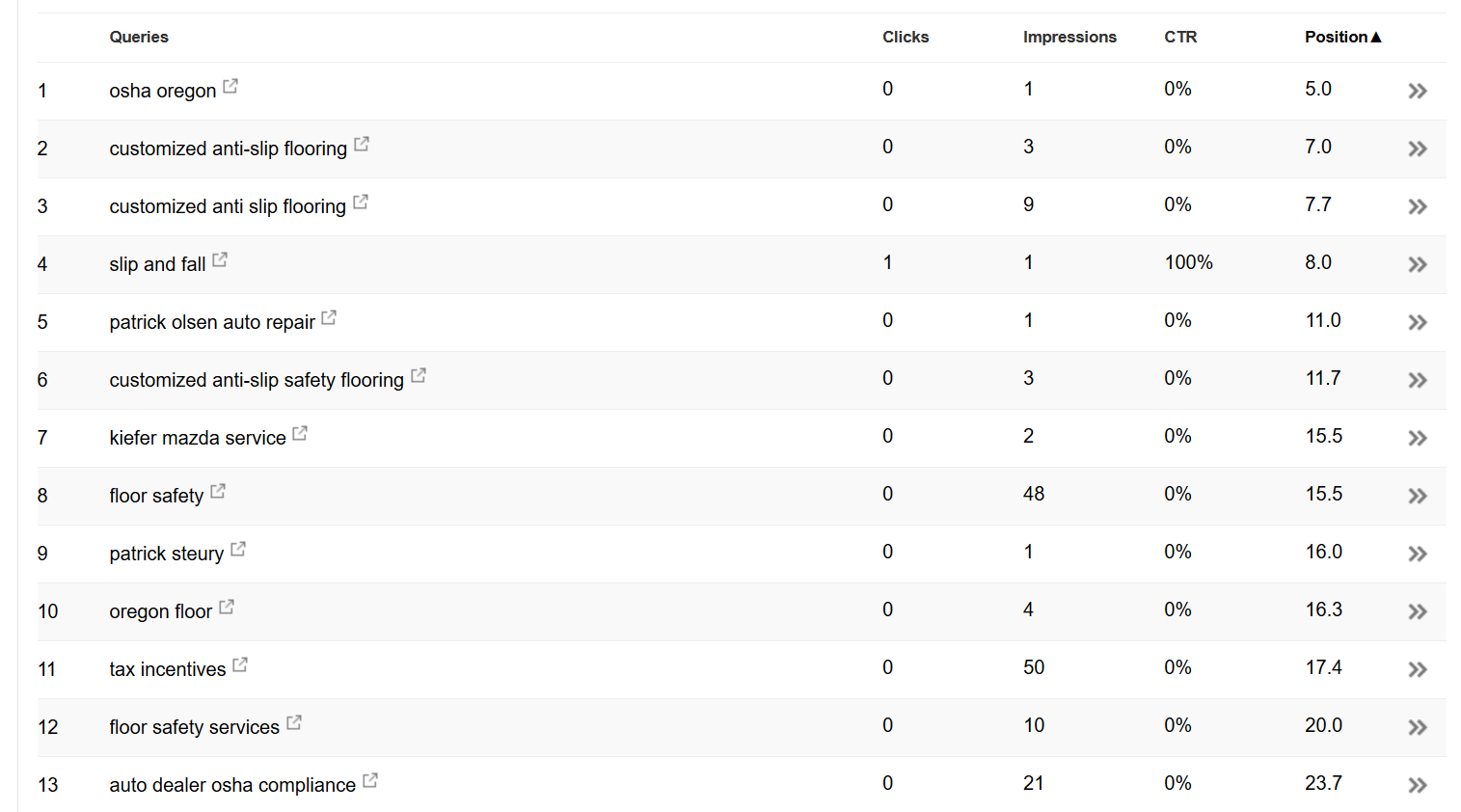 We can see that with the updates made, Jason is ranking for some really specific terms, including stuff in the automotive industry, which is his primary target. The click-through-rate isn’t high, and he could definitely rank higher. With this data available, he can work to improve those numbers.