Every year, Edelman does a survey of people across the world to determine how much the average person trusts government, business, media and non-governmental organizations (NGOs). 2016 started strong, with respondents showing higher trust levels than at any time since the 2008 recession.

However, after a rocky 2016, trust levels have dropped across the board. The 2017 report shows dropping trust for all four groups, along with some interesting, more specific, trends. While this could be viewed as bad news for businesses, the trends leave room for opportunity. Here are some of the takeaways and how your business can start taking advantage.

The Informed Population Has No Power 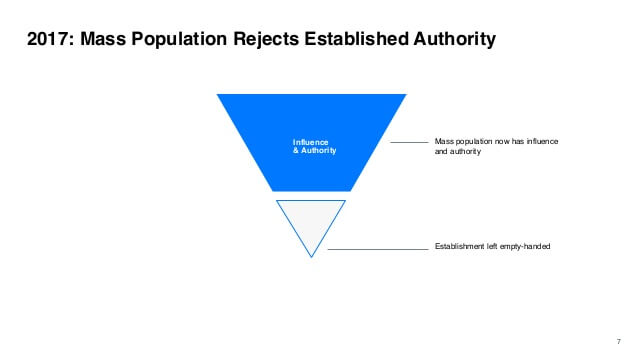 So Who Does Have Authority and Influence?

According to the study, CEOs are considered 37% credible. That’s pretty bad, but expected, considering they tend to be a part of that informed public. People now view their peers as highly credible—the people they work with and interact with on a daily basis. Ads are similarly losing ground. People consider social media more trustworthy than traditional ads, but even social media isn’t the tops for authority.

At the outset of 2017, search engines hold the greatest authority, beating out traditional media like newspapers, online-only media like Buzzfeed, social media, and the amorphous “media” as a whole.

How To Take Advantage of the New Authority

With search engines holding the cards, your SEO efforts are now more important than ever. Ranking high makes you look great, and ranking often won’t hurt either. The ins and outs of how to rank, of course, haven’t changed, but the entire process is now doubly important.

With people distrusting CEOs and businesses and finding the recommendations of their peers more important, 2017 looks like a great year to get working on those testimonials. Reach out to your previous clients and see if they’re willing to tell the world how great their experience was. Work on getting Yelp and Google reviews, and even feature some of those on your website. Those recommendations are going to be much more valuable than any ads you might run.

Perhaps even more importantly, start flexing your employees as part of your marketing strategy. Average employees are a closer match to your audience than rehearsed actors or senior staff. In fact, according to this year’s study, your employees hold more influence than academics, media, and even other consumers on a variety of topics . Make your employees evangelists for your business by having them contribute to the company blog. Show your appreciation for them on your website or via weekly social media shoutouts. The public has begun to expect it from you. More on that later. 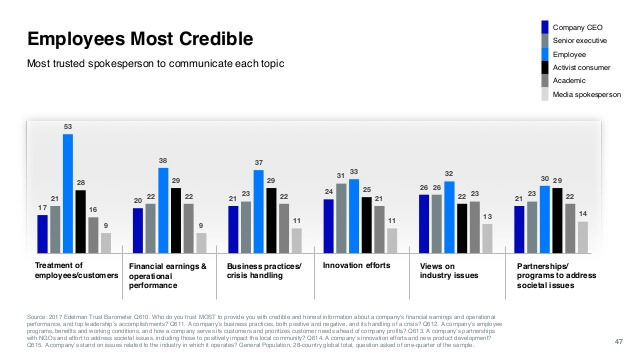 2017’s barometer shows 67% of Trump voters and 45% of Clinton supporters are, to put it generally, “fearful”. The top fears cited include corruption, globalization and eroding social values. As a business, your outreach and marketing must address these fears specifically.

Transparency and engagement will help with concerns of corruption. By speaking personably in your ads and on your blog, you can try to relate to your consumers and gain their trust. Focus on being approachable and relatable to set you aside from your competition. People will feel great about knowing the person they do business with.

To address fears of globalization, lean on your employees in your marketing efforts and demonstrate that they’re local rather than working from a call center overseas. Be sure to advertise a local supply chain if you have one. If you don’t, it could be time to shift to one. This would make a great topic for your blog, making you seem engaged in the community and responsive to concerns. Doing business globally is exciting, but think local to do better in the current climate.

The above advice is enough to get you in front of new customers and make sure they at least give you an honest listen, but how do you retain them? Consumers are expecting businesses to do more to earn their, well, business. They want you to bring a lot to the table, and a lot of businesses aren’t going to cut it. How can you respond?

These folks are distrustful because they believe the system is failing them personally, so be ready to engage in a dialogue with your consumers. Not only should your advertising feel genuine, but you should be responding to individual people’s needs in a public manner to back up that image. Fortunately, most people are going to air their complaints in a public fashion via Yelp, Google or Facebook. This gives you a public forum for that dialogue, but can potentially create brand management issues. Hopefully that won’t be a problem for you.

Your business practices will be held to greater scrutiny. First, avoid any practices that might make for a good bottom line, but ultimately look scummy. Avoid collusion, tax evasion, high wage gaps, high profit margins on products people require to live, and lowering product quality to improve margins. A jelly-of-the-month club membership might not earn you much goodwill. As if all that needed to be said.

Those are the don’ts—what about the dos? Consumers want to do business with companies that treat their employees well, offer high-quality products, listen to their customers, pay their fair share of taxes and, overall, have ethical business practices. Hopefully you’re already doing most of these, so now it’s a matter of advertising it. If your product is durable and dependable, start pushing that on social media. Videos are high engagement, so film stress tests to create buzz. Document employee benefits like paid outings on your blog and social media.

Finally, be engaged in your community. This trend was popular in early America, observed by Frenchman Alexis de Tocqueville. He called it “self-interest rightly understood”, but Edelman put it more simply in their survey. 75% of those interviewed agreed:

A company can take specific actions that both increase profits and improve the economic and social conditions in the community where it operates.

That is to say that you should identify ways you can improve the community that also help your business. People will notice and appreciate it. To put an exclamation point on it, make sure you’re utilizing social media (free, and now considered credible) to advertise those efforts.

A Year of Recovery

Even though your business specifically might not have had rough publicity in 2016, these trends affect everyone. Take advantage of opportunities to build back consumer trust and set yourself apart from those who might be less respectable. It can be a big job, so 2017 might be the year to employ some extra help to do it. Talk to Sterner Stuff about search engine optimization and digital marketing. I’ll work with you to keep your brand strong and dependable.